We use cookies for an optimal shopping experience. For example, language settings and items in the shopping cart are saved on your computer. By clicking on 'Accept', you revocably agree at any time that we and third-party services used in the shop, use cookies and similar technologies to optimize the website, to create anonymized user profiles and to display interest-based advertising.

At the new location in Berlin-Schönefeld, Benjamin Scheper and his FONTLINE team stage large-format advertising worlds for a wide range of applications. The setting for this is handicraft creativity, a modern machine park, a spacious workshop and shelves from TOPREGAL.

Born in Berlin, Scheper is managing director of FONTLINE Werbung & Beschriftung GmbH. The company, which specialises in the production of advertising space and vehicle labelling, moved to Bohnsdorf near Schönefeld Airport in spring 2018. The old company headquarters in Neukölln had simply burst at the seams due to the good order situation. Now, FONTLINE is using four times the space with over 1,000 square metres.

"If we don't use the space properly from the start, it will end in chaos." CEO Benjamin Scheper is certain of this. Timo Munz, TOPREGAL customer advisor for Northern Germany and Berlin, can confirm this: The enterprises are only once so impressed by the size that they do without a reasonable storekeeping including inventory control system at first. In the second year at the latest, however, they realize that they also have to use the height in order to grow further. TOPREGAL offers the appropriate shelves and tailor-made storage solutions for this purpose. Because FONTLINE grows. A few weeks ago, Benjamin Scheper and his team of currently twelve advertising, graphics and digital printing specialists won a tender of Messe Berlin GmbH. This promises new orders in new formats. 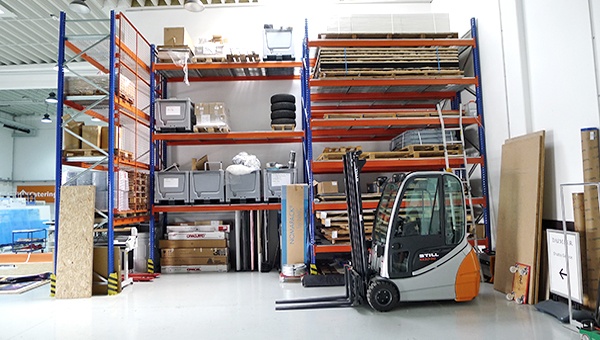 Customized according to customer requirements

"I simply googled", Scheper answers the question of how he came across a shelf dealer from Filderstadt near Stuttgart in Berlin. At first he was on the side of a Berlin supplier. But he only felt he had been there for 90 seconds because he had not found what he wanted. On www.topregal.com on the other hand, Scheper found exactly the shelf including accessories for assembly as a complete offer with a final price. And that price was also significantly lower than what he had actually calculated. Besides a pallet rack and a cantilever racking for the required rolls, profiles and panels FONTLINE uses a mobile worktable/packing table which TOPREGAL has specially put together.

"I already had exact ideas during the planning phase as to what the office space and the warehouse at our new location should look like" FONTLINE, as Benjamin Scheper points out, has very few trading partners and suppliers. This also applies to TOPREGAL. Reason for it was a classic in advertising or PR agencies: One notices on Friday that next Monday a large Shooting for a major customer including film crew for the Making-of is to take place. But the warehouse is still full of pallets, boxes and other odds and ends. So a shelf has to be found - and as soon as possible.

TOPREGAL always has - and this is what distinguishes the company from many of its competitors - large quantities of all racks in stock, so that rush orders with immediate pick-up in one of the warehouses can be carried out at any time. Benjamin Scheper was very impressed by this: "I don't remember how, but it all worked". The delivery was sent on its way to Berlin by a forwarding agent on Friday, arrived on Saturday and was set up on Sunday. Just in time, then. When the trucks to be covered and the film team drove into the warehouse on Monday, everything looked perfect. "In any case, the customer and the film team didn't notice anything," Scheper points out.

FONTLINE Werbung & Beschriftung GmbH was founded by Benjamin Scheper in Berlin in 2002. The company specialises in the production/manufacturing of advertising technology, digital printing, vehicle lettering as well as event and trade fair construction. Daimler AG is one of its well-known customers, including the 'Mercedes-Benz Fashion Week Berlin'. After the old location in Berlin-Schöneberg became too small, FONTLINE moved to the immediate vicinity of Schönefeld Airport in early 2018. The new company headquarters can be reached easily by S-Bahn and is located near the motorway with good logistic connections. www.fontline.de