We use cookies for an optimal shopping experience. For example, language settings and items in the shopping cart are saved on your computer. By clicking on 'Accept', you revocably agree at any time that we and third-party services used in the shop, use cookies and similar technologies to optimize the website, to create anonymized user profiles and to display interest-based advertising.

"120 x 80 x 14.4". Almost everyone in the logistics industry knows what sounds like a mental arithmetic task: It's the dimensions of a "Euro pallet". It is the most frequently used pallet in Europe, because it is exchangeable and costs about 10 euros, both new and used. The point load is 1,000 kg. With an even load it can carry a maximum of 2,000kg. A great advantage of the euro-pallet is that it can be picked up with a forklift from all four sides. It must have the marking in accordance with EN13698-1 in order to be designated as a Euro pallet by the manufacturer's code. The mark of the European Pallet Association e.V. (EPAL) is located on the left corner block.

Leading indicator of the economy

The European Pallet Association e.V. (EPAL) with headquarters in Düsseldorf has reported a record result of 115.8 million produced and repaired EPAL quality charge carriers for 2017. Compared to the previous year, this is an increase of almost 10%. The pure production figures had increased by 9.7% to 88.3 million EPAL pallets in 2017. The number of repairs had climbed to 27.5 million, an increase of 10% compared to the previous year. From EPAL's point of view, the EPAL pallet is considered an early indicator for the economy. The economic barometer, which has been rising for years in economically strong countries, has driven demand to a peak level in 2017, the capacities of EPAL producers and repairers have been fully utilised for months. 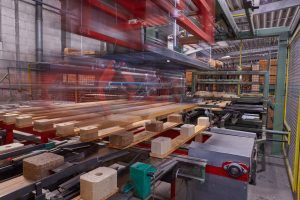 The number of Euro pallets produced and repaired in Germany is considered a leading indicator for the economy. (Photo: EPAL)

The approximately 400 mostly owner-managed companies in the wood packaging industry throughout Germany have Bundesverband Holzpackmittel, Paletten, Exportverpackung (HPE) e.V. with its headquarters in Bad Honnef have joined forces. According to HPE, they generate around 80% of the sector's sales of around 2.3 billion euros. 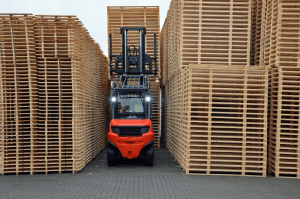 Dimensions & data of the euro pallet